When thinking about which university and what degree subject will get you the highest graduate salary, Oxbridge may well spring to mind with subjects like law or economics. While the course you study can certainly have an impact on your graduate starting salary, many graduates who secure the highest paying jobs come from less prestigious universities.

Having paid thousands of pounds to go to university it’s understandable that graduates want to see their efforts rewarded. While earning a high salary shouldn’t be the only focus of your graduate job search, it’s helpful to know what courses offer you the best earning prospects.

Below are the top 20 highest paying degrees in Britain based on the average salaries earnt by graduates 5 years after graduation.

When we look at the interquartile range of graduate salaries five years after graduation, we can see that medicine graduates actually command the highest average salaries. 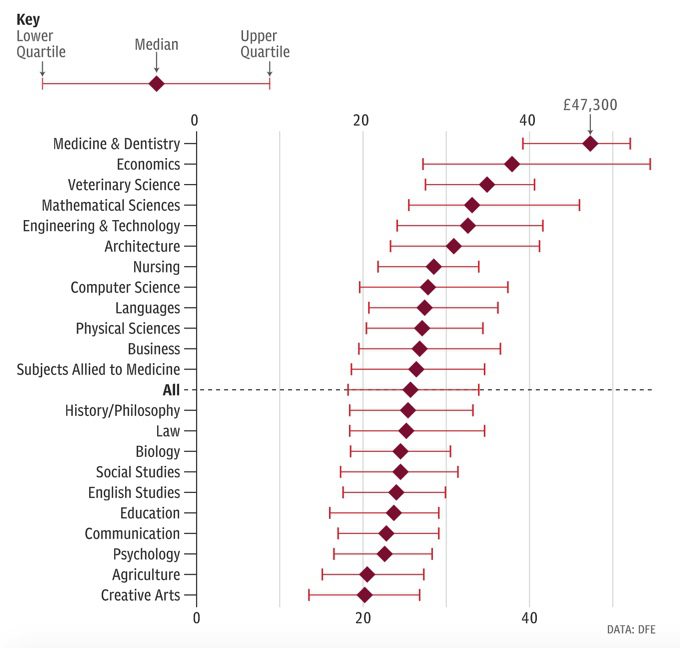 How much of an impact does your course have on your earnings?

While the data above gives graduates an idea about what their course peers have gone on to achieve, there are a lot of factors that determine a graduate’s earning potential.

For example, while Oxford and Cambridge boast graduates with higher salaries, they also select the best students in the country for their courses. It’s therefore difficult to determine how much the university itself had an impact on earning potential.

The career path you choose, where you live and your background can also be influential.

Don’t get too hung up on your salary

Earning plenty of money is great, however, there’s no point in earning £60,000 a year if you dread going to work every day. It’s important to find the balance between what you enjoy, what you earn and the other benefits on offer.

What’s important is different for each of us, so try to make the best decision for you. If you change your mind later, you can always learn from your mistakes and look for a graduate role that is better suited to you going forward.